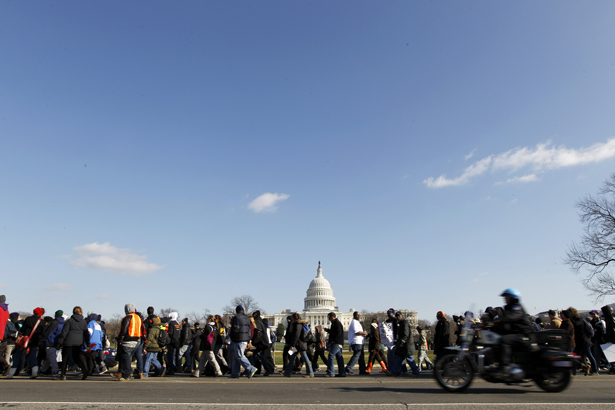 As I entered my jail cell at Capitol Police Headquarters in Washington, DC, I sat down on the cold steel bench and looked around thinking – here I am again.  My eyes came to the mirror above the toilet and I noticed the word “occupy” scraped into the glass and it brought a smile to my face. I thought someone was here before me, someone who cared about the same things I cared about, someone who thought the way I thought, someone who, like me, was doing what they could to try to make the world a better place.

And then I thought that this was  a message that was coming to me across time, a message with a deeper meaning for me right here and right now.  OCCUPY.  I had just been arrested with six brothers and sisters after occupying the office of Democratic Rep. Steny Hoyer,the House Minority Whip.

We need to occupy the offices of members of Congress regularly.  We need to put our bodies on the line and force them to do the right thing.  The myth is that they are there because we voted for them and they are supposed to represent us and do our bidding.  The reality is that they are there because they have the backing of multinational corporations, many of them military contractors, who give large sums of money so they can win elections.  So, whose bidding will they be doing?  Over the last 15 years I have contacted members of Congress and have been ignored.  Steny Hoyer has refused many constituent requests to meet with him or a staff person.

This has to change.  So, while sitting in Hoyer’s office on January 11, my good friend Malachy made an impassioned plea to the 20 activists there to create a campaign of occupation of congressional offices to shake things up and change the system.  And this idea that Malachy brought up made so much sense as I looked at the mirror with the “occupy” scratched into the glass.

A few months ago, we, from the National Campaign for Nonviolent Resistance, decided we needed to address what is happening in Yemen.  As a result of selling arms to Saudi Arabia and refueling their fighter jets in mid-air, we are responsible for the enormous death and suffering occuring in Yemen.  Besides being killed by bombs, over a million people are plagued with typhoid, and there is an epidemic of diphtheria.  Many children are starving to death.  We have blood on our hands.

On the morning of January 11 we attended the Witness Against Torture vigil at the White House.  This marked 16 years of illegally held prisoners being tortured in Guantanamo.  Five people in orange jumpsuits and hoods walked under the yellow tape towards the White House and were quickly arrested.

Members of the National Campaign for Nonviolent Resistance than went to the Longworth Congressional Office building where we had a final planning meeting in the cafeteria.  At about 2:30 pm we went up to Hoyer’s office.

I was carrying a rock in my pocket and I could feel the weight of the rock when we walked into the office.  My nine-year-old granddaughter gave me the rock the week before when I was still in Wisconsin.  She had painted it with a golden horseshoe on one side and a heart with a peace sign in the middle on the other side.  She said she made it for me to give me courage.  So, carrying that rock, I thought about her and my other grandchildren who I love from the bottom of my heart.  In my hands I was carrying a picture of a Yemeni child who was suffering and I thought about how much that beautiful child is loved.  I knew I was just where I needed to be.

We talked to the receptionist, Paul, and told him why we were there and that we wanted a meeting with a foreign policy staff person.   We had three demands: 1) that Rep. Hoyer speak out against Saudi war crimes, 2) that he condemn any further U.S. arms sales to the Saudi-led coalition bombarding and blockading of Yemen, and 3) that he help bring to a vote House Resolution 81 invoking war powers to end U.S. involvement in the Yemen war, a bill he had previously sabotaged.

At 5:00 pm, Paul announced that the office would be closing and we needed leave.  We told him that we couldn’t leave until we were able to meet with someone who could let us know that Hoyer was acceding to our demands.  In an effort to get us out of there Paul finally gave us an email so that we could contact the scheduling person to get a meeting which might not take place for a week or two.  As we thought about how many innocent children could die before a meeting would take place, we told Paul that we still could not leave.

Eventually the police were called and they arrived at the office at 7:30 pm, and cuffed us and arrested us.  We were taken to the Capitol Police Headquarters where we were processed, including being fingerprinted and having our pictures taken.  We were all finally released around midnight.

Arrested were Janice Sevre-Duszynska and Dick Ochs from Baltimore, Alice Sutter from New York City, Malachy Kilbride from Maryland, and three from the Midwest, including Kathy Kelly from Chicago, Phil Runkel from Milwaukee, and me, Joy First, from Mount Horeb, Wisconsin.  We were charged with unlawful entry and have an initial court date of January 31.

It was a long day, filled with anxiety as we went up against the greatest empire in the history of the world, but this is what I have to do.  And, of course I have a choice, but because I know what is happening to the beautiful children of Yemen I really don’t have a choice.

We are at a scary time in history.  Trump is a symptom of what is wrong.  We have a government that caters to the rich and to corporations and does not seem to care what happens to the masses.  The National Campaign for Nonviolent Resistance has been planning and carrying out actions of nonviolent civil resistance against the crimes of our government since 2003, but we need many more to join us.  We won’t bring change by voting for Democrats because they are part of the system.  Just look at Sen. Tammy Baldwin who voted for the $700 billion for the military and supported the F-35 in coming to Madison.  She also gets large campaign contributions from Lockheed Martin and General Electric, both companies are war contractors.

Our government does not want us to see what is happening overseas in the many wars and military actions, the incredible suffering and death of innocent children, women, and men, and the mainstream media is complicit in this coverup.  We have to look at alternative sources for our news so we really know what is happening.

We can’t do anything about the plethora of problems here at home until we bring an end to military exploits abroad.  Today, as we celebrate Dr. Martin Luther King’s birthday, it is important to think about the triple evils of the U.S. government that he talked about, militarism, racism, and poverty.  We see these forces in what our government is doing both overseas and here at home, and it is killing us all.  We have to take action.

What we need to bring change is active resistance.  If you have ever wanted to get involved and do more to bring about a better world, NOW IS THE TIME!  We need to demand our members of congress do what we want them to do and stop catering to the elite.  Let’s start a national campaign of occupying their offices.  We can do this at their local offices in our home states or we can come to DC.  There has been too much apathy, but if enough people got involved and let members of Congress know we are serious, we could bring change.  Please join me and others at the National Campaign for Nonviolent Resistance.  It is up to us.  THE PEOPLE HAVE THE POWER AND WE HAVE TO USE IT!