Time to Act on Dr King’s Call to Tackle Evils of Racism, Economic Exploitation, and War 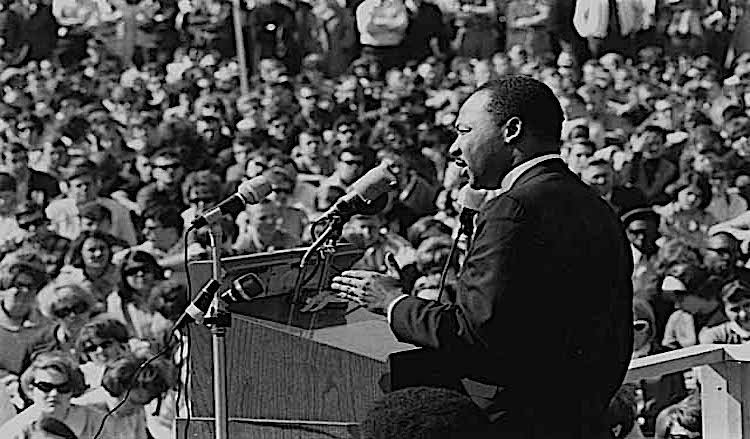 The Stockholm International Peace Research Institute (SIPRI) just issued its 2020 Yearbook, reporting on developments in armaments, disarmament, and international security. In light of the drumbeat of frightening news about growing hostility between the dominant nuclear-armed states vying for power, SIPRI describes a bleak outlook for arms control. It notes ongoing nuclear weapons modernization and new weapons development, space weaponization moving forward, without check or controls, and a disturbing increase in geopolitical tensions together with a rapid deterioration in practices and possibilities for cooperation and monitoring between the great powers.

All this is taking place against the background of a once in a hundred years global plague, and a rising tide of public revulsion against racism. It is apparent that people, not only in America, the heartland of racial segregation and police brutality to formerly enslaved people brought to these lands in chains against their will from Africa, but people all over the world, are protesting the violent and racist tactics of domestic police forces, whose mission is to protect people, not terrorize, maim and kill them!

As we begin to tell the truth and seek ways to repair the damage of racism, it is well to remember Martin Luther King’s 1967 speech,[i] where he broke with a sympathetic society, similarly to the way global activists today are being asked by the establishment to “tamp it down” and not ask to “defund the police” as unnecessarily provocative.

He urged that we must also deal with “the evil of poverty” for 40 million people in the United States, “some of them Mexican American, Indians, Puerto Ricans, Appalachian whites… the vast majority…Negroes”. In this time of the plague the grim statistics as to the disproportionate number of black, brown, and poor people who died these past few months, clearly reinforces the point King was making.

Finally, he spoke of the “evil of war” declaring that “somehow these three evils are tied together. The triple evils of racism, economic exploitation and militarism indicate that “the greatest challenge facing mankind today is to get rid of war.”

We know today that the greatest existential threat our planet faces today is nuclear war or catastrophic climate change. Mother Earth is giving us a time out, sending us all to our rooms to reflect on how we address the triple evils about which King warned us.

The burgeoning arms race reported by SIPRI, must be stopped just as we are finally stopping racism and finishing the job begun by King that ended legal segregation but kept in place horrendous practices that are now being addressed. We need to address the additional evils that include economic exploitation and to start telling the truth about the arms race so that we can put an end to war. Who is provoking the arms race? How is it being reported?

An example, of reporting gone awry is a recent article written by former Ambassador Thomas Graham:

The United States took this commitment [to negotiate a Comprehensive Test Ban Treaty] seriously. It already had placed a moratorium on nuclear testing in 1992, prompting most of the world to do the same, essentially adopting an informal global moratorium on nuclear-weapon tests beginning in 1993. The negotiating conference in Geneva agreed to a CTBT within the one-year time frame.

Here Ambassador Graham erroneously credits the United States and fails to acknowledge that it was the Soviet Union, not the United States, which first instituted a moratorium on nuclear testing under Gorbachev in 1989, when the Kazakhs, led by Kazakh poet Olzas Suleimenov, marched at the Soviet test site in Semipalatinsk, Kazakhstan protesting the underground nuclear tests that were venting in the atmosphere and causing increased incidences of birth defects, mutations, cancers to the people living there.

In response to the Soviet testing cessation, Congress, which refused to match the Soviet moratorium saying that we couldn’t trust the Russians, did finally agree to a US moratorium after the Lawyers Alliance for Nuclear Arms Control (LANAC) raised millions of dollars privately under the leadership of Adrian Bill DeWind, founder of LANAC and President of the NYC Bar Association, to hire a team of seismologists, and visited Russia where the Soviets agreed to allow the team to monitor the Soviet test site at Semipalatinsk. Having our seismologists at the Soviet test site eliminated Congress’ objection.

After the moratorium, the CTBT was negotiated and signed by Clinton in 1992 but it came with a Faustian deal with Congress to give the weapons labs over six billion dollars a year for “stockpile stewardship” which included computer-simulated nuclear tests and sub-critical tests, where the US was blowing up plutonium with high explosives, 1,000 feet below the desert floor on Western Shoshone holy land at the Nevada test site.

But because those tests didn’t cause a chain reaction, Clinton said it wasn’t a nuclear test! Fast forward to 2020, where the language has now been massaged by the arms “control” community to describe a ban not on nuclear tests but on “explosive” nuclear tests-as if the many sub-critical tests where we are blowing up plutonium with chemicals aren’t “explosive”.

Of course, the Russians followed suit, as they always have, by doing their own sub-critical tests at Novalya Zemlya! And this advanced testing and lab experimentation was the reason given by India for not supporting the CTBT and breaking out of the testing moratorium within months of its signing, swiftly followed by Pakistan, not wanting to be left behind in the technology race to continue to design and test nuclear weapons. And so, it went, and goes! And the SIPRI statistics grow grimmer!

Time to tell the truth about the US-Russian relationship and US complicity in driving the nuclear arms race if we are ever to reverse it as well as the race to weaponize space. Perhaps, by addressing the triple evils, we can fulfill King’s dream and the mission envisioned for the United Nations, to end the scourge of war! At a minimum, we should be promoting UN Secretary-General António Guterres’ call for a global ceasefire while our world attends to Mother Earth and addresses this murderous plague.

Alice Slater serves on the Board of World Beyond War, and represents the Nuclear Age Peace Foundation at the United Nations.