Troops Out Of Germany And Down A Rabbit Hole 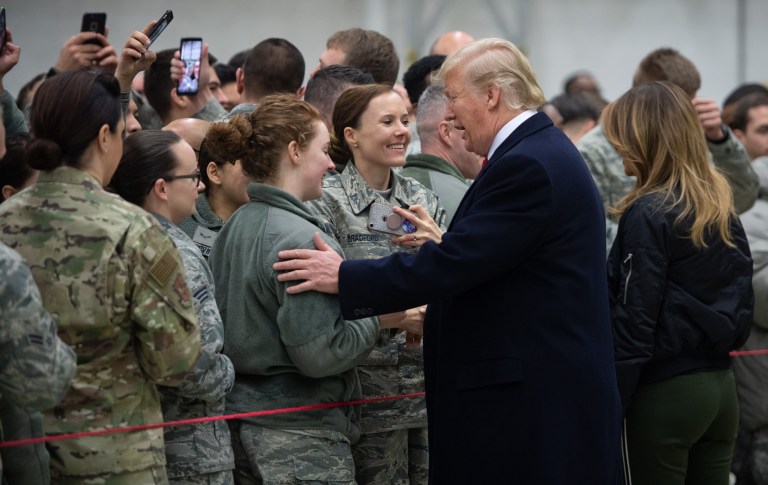 I read this nightmare fantasy in the Financial Times:

“Of course, a second term for Mr Trump would have a wholly different impact on US-German relations than would a Joe Biden presidency. It is conceivable that a victorious Mr Trump would push hard to end US wars in Afghanistan and the Middle East, and take American troops out of Europe. He might even hope to make an ally of Russia against China. It would almost certainly be the end of NATO.”

Of course, virtually anything is “conceivable,” although few things are “almost certain” — perhaps least among them the end of NATO. But Trump has spent four years creating record military spending, record drone killings, escalation of numerous wars, major base construction, major nuclear weapons construction, unprecedented shredding of disarmament treaties, heightened hostility with Russia, more weapons in Europe, more weapons on Russia’s border, larger war rehearsals in Europe than seen in decades, record weapons dealing around the globe, greater military spending and investment in NATO by its members, and — of course — no end to the war on Afghanistan that Trump promised to end 4 years ago, or to any other war.

The only candidate for U.S. president that appeals to me is either the socialist whom Trump and Pence sometimes pretend Joe Biden is or the pacifist that the media sometimes pretends Trump is. Well, not exactly pacifist. The media view is that Trump wants to withdraw troops from Germany as an act of hostility toward Germany — which does actually seem to be Trump’s view of it as well. Similarly, ending a war on Afghanistan would be essentially an attack on Afghanistan, and creating better relations with Russia would be treasonous madness, while ending an unjustifiable warmongering alliance called NATO would amount to kicking numerous friends in the teeth — which would of course endanger us all.

Good liberals can apparently rest assured that sane and sensible Joe Biden will escalate the Cold War with Russia, keep killing Afghans, fund every war profiteer in sight, and never withdraw a troop from anywhere.

Of course, in reality, both candidates promise to end the war on Afghanistan, but after 19 years that sort of talk just fades into the background like “God Bless America” and “My opponent is a lying pig.” Choosing to believe one of these would-be emperors on his promise to end the war on Afghanistan is a more daring act than choosing to ignore the other of them.

But the lack of any peace candidate or peace party, combined with Trump’s tendency to only ever do the right things for insanely wrong reasons, and the virtual exclusion of all talk of peace from political discourse, means that troop withdrawals and war-alliance-dismantlings and even the ending of wars can all be treated as nefarious evil deeds, while anything that facilitates mass murder is good humanitarianism.

As of July, Trump was supposedly wanting to take 12,000 U.S. troops out of Germany (6,400 to return to the United States, and 5,400 to be sent to occupy other countries), with 24,000 remaining in Germany, because 75 years would just be too rushed to withdraw them all. But the Democrats in Congress, leapt to their feet, as they’d done on Korea, and forbade withdrawing any glorious troop from any gratefully occupied fiefdom — or rather, imposed restrictions to slow down any withdrawal until the possible end of the Trump regime.

Meanwhile, the U.S. military started talking about moving troops to Eastern Europe, as close as possible to Russia, instead of bringing them home to the United States. You’d think that would appease the Democrats, but no, they want, and Biden in particular wants, every last troop to remain in Germany which is supposedly the best place to practice killing Russians even if it’s not the closest place to Russia.

So the liberal, humanitarian, friendship-promoting position is to keep the holy troops in Germany and on any other bit of the globe they occupy. Unless of course we should decide to wake up outside the rabbit hole and run into the house for tea.