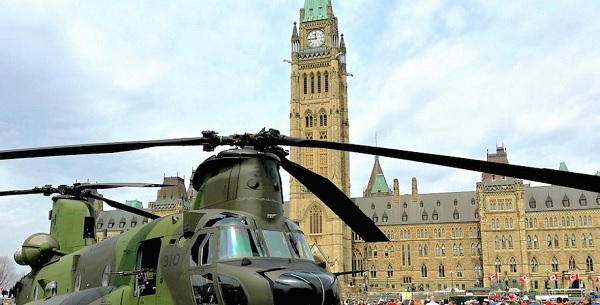 A volatile leader in charge of a military behemoth prone to aggression has repeatedly attacked Canada and its prime minister in recent weeks. But this country’s “defence” community, which often hypes Russian, jihadist and other threats, has barely made a peep.

Citing a concern for its “national security,” the U.S. slapped tariffs on Canadian steel and aluminum imports at the end of last month. Since then Donald Trump has repeatedly criticized Justin Trudeau and two of the U.S. president’s top advisers called the prime minister “dishonest,” “weak” and “rogue” and said “there’s a special place in hell” for him.

The bombastic rhetoric targeting the Trudeau government is coming from a state that has substantial military capacity close to the Canadian border and has repeatedly invaded nearby nations. The U.S. is currently dropping a bomb every 12 minutes on seven different countries and its troops are fighting/operating in dozens more. And its commander-in-chief is highly impulsive.

Despite this aggressive posture from Washington, Canada’s “defence” community hasn’t raised the alarm or sought to capitalize on the tension by asking for more weapons and troops. Contrast this with the academics and think-tanks funded by arms companies and the Department of National Defence which regularly hype lesser threats in a bid to increase military spending.

Why the difference in treatment of “threat” assessments?

The “defence” sector ignores U.S. threats because it is not oriented towards protecting Canada from aggression. Rather, Canada’s military, weapons companies and “defence” intellectuals/think-tanks are aligned with the U.S. empire’s quest for global domination.

According to DND, there are “80 treaty-level agreements, more than 250 memoranda of understanding, and 145 bilateral forums on defence” between the two countries’ militaries. In 2015 CBC reported on sustained, high-level, Canadian and U.S. military discussions to create a so-called Canada-U.S. Integrated Forces. Not shared with Canadian political leaders, the plan was to set up integrated air, sea, land and special forces to operate under a unified command when deployed internationally.

The depth of the Canada-U.S. military alliance is such that if U.S. Forces attacked this country it would be extremely difficult for the Canadian Forces to defend our soil. In fact, given the entanglements, the Canadian Forces would likely enable a U.S. invasion: As with the 2003 invasion of Iraq — which Ottawa officially opposed — some Canadian troops on exchange in the U.S. might march north; as is the norm when the U.S. invades another country, Canadian officers would likely operate NORAD systems aiding the aggression; as with the wars in Vietnam, Iraq and elsewhere, weaponry produced in Canada would certainly be used by U.S. soldiers marching north.

The Canadian “defence” sector has tied its ship to our southern neighbour’s massive military industrial complex. But, the truth, unpalatable as it may be to some, is that the USA is the only nation that could realistically invade Canada.

This is not an argument for a military policy that views the U.S. as a threat. Canada’s best defence against an invasion is making sure hundreds of millions of people in the U.S. and elsewhere know this country is not their enemy. Additionally, Canadians face far more pressing dangers (cars, industrial pollutant, climate disturbances, etc.) than a foreign invasion.

Instead of responding to Trump’s belligerence by ramping up military preparedness — which the U.S. president demanded in a letter to the prime minister last week — we should be debating the point of a Canadian “defence” sector unwilling to even discuss defending our country from its primary military threat.

A critical question to ask: why do we spend over $20 billion a year on a Department of National Defence?