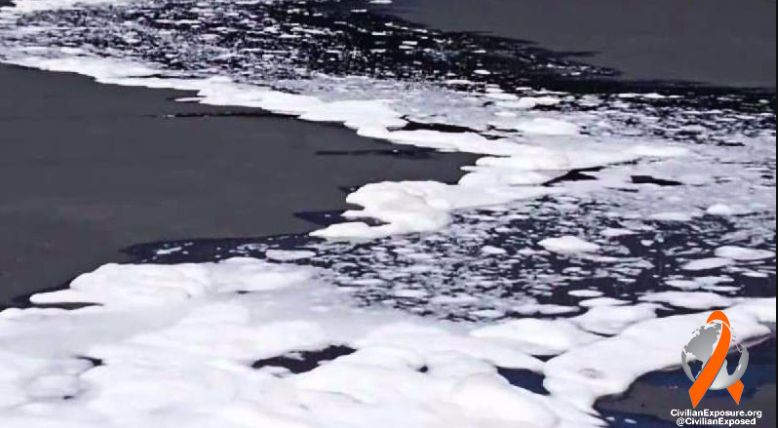 A fire suppression system in an aircraft hangar discharged a massive volume of toxic firefighting foam from Marine Corps Air Station Futenma in Okinawa on April 10.

The foam contains perfluoro octane sulfonic acid, or PFOS, and perfluoro octanoic acid, or PFOA. Massive foamy suds poured into a local river and cloud-like clumps of foam were seen floating more than a hundred feet above the ground and settling in residential neighborhoods.

A similar incident occurred in December when a fire suppression system mistakenly discharged the same carcinogenic foam. The latest toxic release has inflamed Okinawan resentment toward the Japanese central government and the U.S. military over frequent leaks of toxic chemicals from the base.

The chemicals are known to contribute to testicular, liver, breast, and kidney cancers, as well as a host of childhood diseases and abnormalities in the developing fetus. Their manufacture and importation have been prohibited in Japan since 2010. Okinawa’s drinking water contains high levels of the substances.

The Okinawa Times and the Military Times report that 143,830 liters of the foam escaped the base out of a spill of 227,100 liters released from a hangar. The Asahi Shimbun reported that 14.4 liters escaped, very unlikely considering the scale of the release.

On April 18 Japanese officials were allowed access to the base, the first time access has been granted since the provisions of an environmental supplementary agreement to the Japan-U.S. Status of Forces Agreement took effect in 2015. The agreement says the Japanese government or local municipalities “may request” permission from the U.S. side to conduct surveys.

Neither the Okinawa prefectural nor Ginowan municipal governments were contacted to join the investigation. When asked why the Okinawan officials were not present, Japanese Defense Minister Taro Kono replied that this was the Japanese national government’s mistake, according to the Asahi Shimbun

An Okinawan prefectural official was allowed into Futenma on April 21.

US military and Japanese central government authorities apparently want to keep the enraged Okinawan public from gaining a complete picture of the design of the hangar suppression systems.

In the case of an aircraft fire in a hangar, five meters of deadly foam can typically cover aircraft in two minutes. When a hundred million dollars, invested in a single aircraft is at stake, it is not hard to imagine the financial considerations driving this extreme approach to protecting the property. The foam, containing the “forever chemicals,” easily snuffs out petroleum-based fires but it also contaminates groundwater, surface water, and sewer systems on a deadly scale when it is rinsed out of the hangar. The US military values the jet fighters over human health and the environment.

Okinawans only need to watch this video of a suppression system at McGhee Tyson Air National Guard Base, in Knoxville, Tennessee to witness the criminal assault on Mother Earth and on future generations of our species:

Groundwater at the Tennessee base 60 feet below the ground was found to contain 7,355 ppt of 6 types of per- and poly fluoroalkyl substances, (PFAS), far surpassing Environmental Protection Agency guidelines. Surface water on base contained 828 ppt of PFOS and PFOA. This carcinogenic foam has been allowed to enter both the storm drain and sanitary sewer systems. Similar levels of the carcinogens have been found in Okinawa. In a word, the U.S. military keeps flushing gigantic toilet bowls of poison into the waterways of Tennessee, Okinawa, and hundreds of other locations worldwide.

Tomohiro Yara, a representative of the National Diet from Okinawa, reflected the attitude of the Okinawan public when he said, “The US government should take full responsibility for cleaning up soil and water at any military base abroad. We must protect the environment for everyone on the planet.”

The Japanese central government, which is in a position to influence American behavior, is asleep at the wheel by failing to ask why the US military is adamant about using the deadly foams when suitable replacements are available and are being used across the world.

Kono said U.S. officials were continuing to look into how the leak occurred, as if the Americans were unsure. We hear these same absurd excuses every time they recklessly unleash their poisons on our world.

Meanwhile, Japanese government officials are playing right along with the DOD’s game of pretending to search for firefighting solutions when they already exist.

Kono parroted the U.S. line when he said it might be a while before a non-PFAS replacement is found, claiming that the Japanese government has had to ask Japanese companies to develop a replacement and that he will close in on whether a replacement is actually possible. Without an understanding of the wily U.S. military, many people in Japan may wind up believing him.

This is all part of a DOD propaganda campaign. They produce nonsense such as, Naval Research Lab Chemists Search for PFAS-Free Firefighting Foam. The DOD disseminates a narrative about their “search,” because they claim the fluorine-free foams currently available on the market are not suitable alternatives to the carcinogenic foams they currently use in practice drills and emergencies.

The U.S. military has known these chemicals are poisonous for two generations. They have contaminated huge swaths of the earth while using them, and they will continue to use them until they are forced to stop. Much of the world has moved beyond the cancer-causing foams and has begun using extraordinarily capable flourine-free foams while the U.S. military sticks to its carcinogens.

Yet the DOD obstinately continues to ruin human health, simply for their own convenience. They have recently published a PFAS Task Force Progress Report, orchestrated to confuse the public while it continues to use the lethal substances. They claim they have three goals: (1) mitigating and eliminating the use of the carcinogenic foam; (2) understanding the impacts of PFAS on human health; and (3) fulfilling their cleanup responsibility related to PFAS. It’s a charade.

The DOD has shown no progress toward “mitigating and eliminating” the use of the foam. The Pentagon ignores the science behind the substitutes while it feigns a robust program to develop safe foams. They have been aware of the disastrous impact on human health and the environment for two generations. The US military has only cleaned up a tiny fraction of the messes they have created worldwide.

If the commanders at Futenma were truly serious about protecting human health and cleaning up PFAS in Okinawa, they would test water throughout the island, including storm water and wastewater flowing from contaminated sites. They would test biosolids and sewer sludge. And they would test seafood and agricultural produce.

The Pentagon’s Progress Report reviewed the DOD’s current overseas environmental cleanup policy and determined that the DoD takes “prompt action on base to address substantial impacts to human health and safety due to DoD activities and to comply with international agreements.” No big surprise there. The DOD has always given itself high marks on environmental stewardship.

Sadly, we cannot look to Congress to provide oversight regarding the DOD’s reckless behavior. Consider the 2020 National Defense Authorization Act which gives the military the freedom to use the deadly foam indefinitely.

By early 2023 the Navy is required to develop a fluorine-free fire-fighting agent (when such fire-fighting agents already exist) for use at all military installations and to ensure it is available for use by 2025. Flourine-free foam will be required at all US military installations after September 25, 2025. However, the military may continue to use the carcinogenic foams if their use is deemed “necessary for the protection of life and safety.” The NDAA does not specifically mention whose life and safety they are referencing. Given their approach to the world, one would assume they are only concerned about the “life and safety” of American service members and their dependents. They do not even protect those lives from their PFAS.

The military must provide to Congress “an analysis of potential populations impacted by continued use of fluorinated aqueous film-forming foam” and why the benefits of continued use of the poisons outweighs the negative impact on such populations. It should not be too tough for the military to produce such a report, meaning Okinawans and their descendants can expect to be foamed indefinitely. PFAS in the foams can alter DNA.

Additionally, the NDAA will continue to allow the release of AFFF for the purpose of emergency responses and of testing of equipment or training of personnel, “if complete containment, capture, and proper disposal mechanisms are in place to ensure no AFFF is released into the environment.” How, exactly is that to be accomplished with overhead suppression systems dumping 227,000 liters of foam in a few minutes?

The congressional action and the rubber stamp PFAS Task Force reinforce the cavalier attitude expressed by David Steele, commander of Futenma Air Base, who said, regarding the most recent release of the carcinogenic foam in Okinawa, “If it rains, it will subside.”

Thanks to Joe Essertier for his edits and commentary.

Pat Elder is a World BEYOND War board member and an investigative reporter with civilianexposure.org, an organization from Camp Lejeune, NC that tracks military contamination.