Veterans Call for Diplomacy To End the War in Ukraine, Not More Weapons to Escalate It and Risk Nuclear War 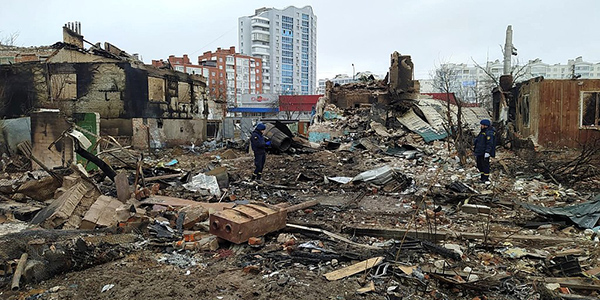 By Russia Working Group of Veterans For Peace, June 13, 2022

Those who profit from wars also support a divide and conquer strategy.  The peace movement needs to avoid what is really a quagmire of blame, shame, and recrimination. We need instead to seek positive solutions – solutions grounded in diplomacy, respect, and dialogue.  We must not let ourselves be fooled, distracted and at odds. The war-horse is out of the barn.

Now is the time to focus on solutions: Stop the Escalation. Start the dialogue.  Now.

“Those with economic and political power that want this war prolonged would like nothing better than to see the peace and justice movement split and fractured over this. We can’t allow this to happen.”  — Susan Schnall, national president of Veterans For Peace.

As veterans, we say “war is not the answer.” We do not agree with media calls for escalation and more weapons – as if that will resolve the conflict. It clearly will not.

Nonstop media coverage of alleged Russian war crimes is being used to drum up support for further US/NATO escalation of the war in Ukraine, which many now see as a proxy war against Russia. As many as 150 public relations firms are said to be working with the government of Ukrainian President Volodymyr Zelensky to shape public perception of the war and to push for more tanks, fighter jets, missiles and drones.

The US and other NATO countries are flooding Ukraine with lethal weaponry that will haunt Europe for years to come – some portion of which will surely end up in the hands of warlords and fanatics, or worse – bring about WW III and a nuclear holocaust.

US sanctions against Russia are causing economic chaos in Europe and food shortages in Africa and Asia. Oil companies are taking advantage of the war to gouge consumers with artificially high gas prices. Weapons manufacturers can scarcely contain their glee at their record profits and lobby for even more outrageous military budgets, while children are murdered here at home with military-style weapons.

President Zelensky is using his saturation media exposure to call for a No-Fly Zone, which would put the US and Russia in direct combat, risking nuclear war. President Biden has refused to even discuss the security assurances Russia has diligently sought. Since the invasion, the US has poured more fuel on the fire with weapons, sanctions and reckless rhetoric. Rather than stop the killing, the US has been pressing to “weaken Russia.” Instead of encouraging diplomacy, the Biden Administration is prolonging a war that is endangering the entire world.

Veterans For Peace has issued a strong statement, Veterans Warn Against No-Fly Zone. We are concerned about the very real possibility of a wider war in Europe – a war that could go nuclear and threaten all of human civilization. This is madness!

Members of Veterans For Peace are calling for an entirely different approach. Many of us continue to suffer physical and spiritual wounds from multiple wars; we can tell the hard truth. War is not the answer – it is mass murder and mayhem. War indiscriminately kills and maims innocent men, women and children.  War dehumanizes soldiers and scars survivors for life. Nobody wins in war but the profiteers. We must end war or it will end us.

Peace-loving people in the US must make a strong, united call on the Biden administration to: