Announcing our new volunteer spotlight series! In each biweekly e-newsletter, we’ll be sharing the stories of World BEYOND War volunteers around the world. Want to volunteer with World BEYOND War? Email greta@worldbeyondwar.org. 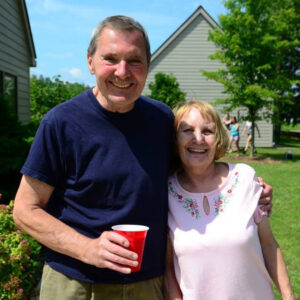 How did you get involved with World BEYOND War (WBW)?
I’m a retired person who has continually sought volunteer activities that meet two specific criteria: 1) that they make use of my own best abilities and 2) have objectives that conform to my notions of what it will take to make the world a better place. My skills are writing and editing, and I have always believed that the elimination of war is essential to building a better world. Among other purposes, it would end the suffering and death of the innocent victims of war; make large sums of money available to help meet the real needs of people both at home and abroad; help substantially abate environmentally destructive carbon emissions generated in both the testing and use of weapons of war; provide an incontestable basis for abolishing both nuclear and conventional weapons stockpiles; eliminate the dehumanization and psychological crippling of those who carry out the missions of war; and make it more possible for civilians in countries that make war to overcome the widespread human pathology of viewing relations with the Other in terms of Us against Them, rather than as an opportunity to build amity based on a common humanity.

I came across World BEYOND War some years ago in scanning the Internet for volunteer editing or writing opportunities with peace groups. That discovery led me to read several books by David Swanson, as well as A Global Security System: An Alternative to War from cover to cover. I also completed a WBW online course in peace-building. I kept returning to the WBW website for news about the organization’s activities and possible leads on contributing to its work as an at-home copy editor. Eventually, I received an email from WBW soliciting volunteer writers for the Peace Almanac project.

The Almanac presents short articles on historical events for each day of the year to illuminate issues of war and peace. I eagerly raised my hand to go to work on the project, and have been producing Almanac pieces regularly for more than a year. For me, the learning derived from the Internet research, together with the organizational gymnastics sometimes needed to highlight the topic within a meaningful context, has made the Almanac project a perfect fit. It has made use of my own abilities, while also creating a medium that communicates the possibilities for peaceful conflict resolution to an audience that may read the articles daily in print, or listen to them in audio form as recorded by David Swanson.

What’s your top recommendation for someone who wants to get involved with WBW?
People who want to get involved with WBW are obviously opposed to war, but will have different strengths to help the organization promote the cause of peace. I would recommend that they first get a good sense of the issues involved by doing the same kind of background study that I did in reading the books or watching the public presentations of WBW’s Executive Director David Swanson on YouTube; reading the latest version of WBW’s A Global Security System: An Alternative to War; and enrolling in a WBW online course. To get involved, sign the Declaration of Peace and check off the volunteer boxes based on their own talents and interests.

What keeps you inspired/motivated to advocate for change?
I get re-motivated every day to advocate for change simply by following the breaking news about U.S. foreign policy: the insane work-up to war with Iran; the immoral imposition of life-threatening sanctions on any country not playing ball with the U.S.; the modernization, rather than abolition, of nuclear weapons; the support of the Saudis in their now genocidal war in Yemen; the one-sided backing of Israel in the Israeli-Palestinian conflict; the irrational demonization of Putin and Russia. As long as the military-industrial-MSM complex determines U.S. foreign policy, the only decent course possible is to advocate for changing our present world to one that puts compassion ahead of power, cooperation ahead of conflict, and love ahead of fear. The best start on that course may also be its signal end: a World BEYOND War.