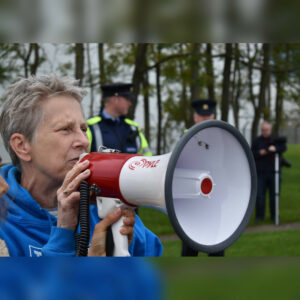 Your personal story is quite interesting. You worked for the U.S. Navy for 20 years of active duty, stationed all around the world, from Iceland to Tunisia. And then you made a complete 180, becoming the first woman national president of Veterans For Peace. What sparked your conversion from Navy Commander to Veterans For Peace President, and now Board President of World BEYOND War?

This is a question that I get asked a lot, and that is understandable. I joined the military for the same reason that most people do, and that is because I needed a job, not because I wanted to play an active part in U.S. military/foreign policy. As a product of the Missouri public education system, I was not taught about the imperialist history of the United States. And, as a woman, there was no question that I would ever be put into the situation of killing someone or fearing death myself, so I was never faced with that crisis of conscience. While I was on active duty, I never considered myself a “warrior,” so I didn’t really convert a full 180. It was more like moving from a neutral position to an antiwar position.

After serving as president of VFP, what inspired you to get involved with World BEYOND War (WBW) in particular?

Veterans For Peace is a great organization, and I am proud of the time I spent in leadership there. VFP is the only major antiwar organization made up of veterans, and that brings with it a credibility that is listened to. I still support their work, but when David Swanson contacted me to tell me about the concept behind this new organization – to address the institution of war in a proactive way, and not in reaction to the “war of the day” – I was really interested. I have been with WBW since Day 1.

What kinds of volunteer activities do you help with?

I don’t know if I come by it naturally, or if it was 20 years as an officer in the Navy, but I tend to take on leadership roles in general. I currently serve as the President of WBW’s Board of Directors. In the early days we had only one part-time staff member – David Swanson – and there were months when we couldn’t even pay him, so I worked hard on building our membership base, fundraising, and education, and I picked up administrative tasks like writing thank you letters. As time went by, I continued to work on a daily basis with David, becoming something like his “right-hand woman.” Basically, I have been a part of everything—fundraising, strategic planning, staff hiring, conference planning, education, etc.

What’s your top recommendation for someone who wants to get involved with WBW?

The first thing everyone should do is simple – take the peace pledge! By signing your name to the WBW Declaration of Peace, you will join over 75,000 people in 175 countries who are all committed to the end of war. Once you sign, you will receive updates on our work, and events going on in your area. Check the website to see if there is a WBW chapter in your area. If so, contact them and get involved with their activities. If you aren’t near a chapter, and you aren’t ready to start one, you can still organize events like a film screening or presentation. Contact our Organizing Director, Greta, and she will hook you up with all kinds of resources to make it easy.

I will admit that sometimes it is very hard to stay inspired and positive. In this field, change comes slowly, and the problems are so large that it is easy to feel like you can’t really make a difference. We know that massive social change can happen, but we have to be an active part of that change. Apathy, indifference and inaction only perpetuate the status quo. I try to follow the words of Helen Keller: “I am only one; but still I am one. I cannot do everything, but still I can do something; I will not refuse to do something I can do.”