“They Want To Know If Trump’s Crazy” 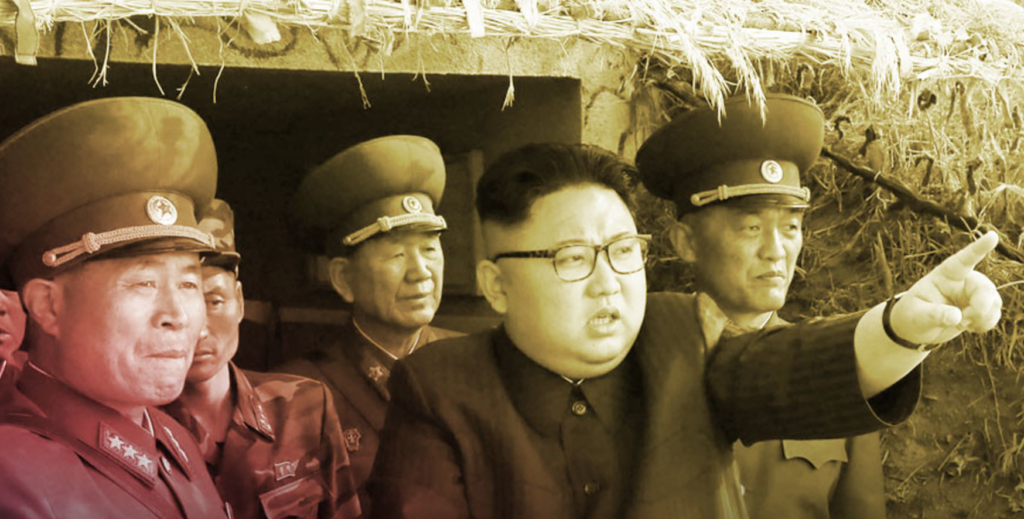 “They want to know if he’s crazy,” said Suzanne DiMaggio, “or if this is just an act.”

“They” is North Korean officials. And “he” is Donald Trump. Four times over the past year, in Geneva, Pyongyang, Oslo and Moscow, DiMaggio has secretly met with North Koreans to talk about the country’s nuclear program. But what they really want to talk about, DiMaggio said in an extensive new interview for The Global Politico, is America’s volatile president.

The North Koreans have asked her not only if Trump is nuts, DiMaggio said, but what and how to think about everything from his public undercutting of his Secretary of State Rex Tillerson to special counsel Robert Mueller’s investigation into possible campaign collusion with Russia.

“They really want to know what is his end game,” said DiMaggio, a scholar at New America who specializes in talking with rogue regimes and has spent the past two years in these secret discussions with the North Koreans. She believes they were ready after Trump’s surprise election to discuss a new round of official talks with the U.S. to defuse the standoff over their nuclear weapons—but that Trump’s escalating rhetoric and Twitter rants such as his weekend taunting of North Korea’s “short and fat” Kim Jong Un may have foreclosed that option. “They follow the news very closely; they watch CNN 24/7; they read his tweets and other things.”

Among issues the North Koreans have raised with her in recent months, DiMaggio said, were everything from Trump’s tweet urging Tillerson to give up on diplomacy with North Korea (“Is this a good cop/bad cop that he’s doing with Tillerson?”) to Trump’s decision this fall to decertify Iran’s compliance with the nuclear deal forged by his predecessor, Barack Obama. That, DiMaggio said, “has sent a clear signal to the North Koreans: Why should they enter a deal with us, if we’re not going to stick with it?”

“They question his erratic behavior, and also his mounting problems here at home, with the investigation being conducted by Robert Mueller, and they are asking, ‘Why should we begin negotiations with the Trump administration, when Donald Trump may not be president much longer?’”

For years, DiMaggio and Joel Wit, a longtime U.S. diplomat turned scholar at Johns Hopkins University who founded the influential North Korea-watching website 38North, have been quietly meeting with North Koreans to talk about the country’s nuclear program. In the past, they hardly acknowledged the conversations, part of a “Track 2” dialogue that has kept a line open to the isolated dictatorship even when the two governments officially were not on speaking terms.

But that was before Trump.

In their meetings with the North Koreans since Trump was elected, DiMaggio and Wit watched their growing alarm and confusion as an initial outreach after the election testing U.S. reaction to new nuclear talks descended into a Trumpian fury of name-calling, mutual recriminations and military escalation. Now she and Wit are speaking out despite their past reluctance even to acknowledge the North Korean meetings, describing them in a recent New York Times op-ed and adding new detail in this week’s episode of our Global Politico podcast. “I don’t normally talk about my ‘Track 2’ work in such a public way,” DiMaggio tweeted. “But these are far from normal times.”

Their account comes at a fraught moment in the burgeoning crisis with North Korea, with Trump wrapping up a 12-day Asia tour after sending confusing and contradictory signals. The president initially projected an uncharacteristically diplomatic approach on the trip, suggesting a new openness to negotiations as a way out of the nuclear impasse, delivering a strongly worded address in Seoul about North Korea’s human rights abuses, and pressing the Chinese in Beijing to make common cause with the U.S. on stepped-up sanctions against the neighboring North Korean regime.

But even before a final stop in Manila, Trump was back into a war of words with Kim that seemed to undercut the trip’s scripted statesmanship. While DiMaggio and Wit had no definitive answer for the North Koreans when they had asked if Trump was crazy, the North Koreans clearly came to their own conclusion. Responding to Trump’s Seoul speech, North Korea’s state media called him a “lunatic old man” looking to start a nuclear war. It warned that the United States faced an “abyss of doom” unless it gets rid of Trump and abandons his “hostile policy.”

Trump, 71, seemed more miffed at the attack on his age than his sanity. Abandoning the carefully formulated statements of his advisers, he tweeted back his outrage about being called old, while insisting, perhaps tongue-in-cheek, that he had tried to become a “friend” to Kim and sarcastically claiming that at least he had never called the rotund young dictator “short and fat.”

Even before that exchange, DiMaggio and Wit told me Trump’s penchant for insulting the North Koreans and their leader in unusually personal terms violated rule No. 1 of what the U.S. government has learned over the years about interacting with the North Koreans: “Whatever you do, don’t personally insult this man,” as DiMaggio put it.

But Trump has once again gone in for tough talk anyway. Will it matter? After all, U.S. presidents have been trying and failing to stop Kim, his father and grandfather for two more than two decades from nuclearizing the Korean Peninsula.

Still, in the interview, DiMaggio and Wit recounted what they believe to be an overlooked willingness on the part of the North Koreans to engage in new negotiations with the incoming Trump administration, an option they now fear may be no longer available. “My concern is that because of all these contradictory statements and the threats, that the narrow window that is opened, I believe, for conducting talks is gradually closing,” DiMaggio said.

In recent weeks, Wit has publicly put the odds of a military conflict at 40 percent, while former CIA Director John Brennan has assessed them at 25 percent amid signs of escalating U.S. military activity that many experts worry could trigger miscalculation or even outright aggression by North Korea. “It’s not the actual military moves,” said Abraham Denmark, who served as the Pentagon’s deputy assistant secretary of defense for East Asia under Obama. “It’s when they’re put together with this inflated rhetoric. That’s when I start getting worried about the increased potential for misunderstanding—and actual conflict.”

It didn’t have to turn out this way, according to DiMaggio and Wit.

In fact, the North Koreans agreed with Trump that Obama’s policy of “strategic patience”—essentially, waiting for them to buckle—had failed. “Very early on, the North Koreans conveyed that they saw a new administration as a potential fresh start,” DiMaggio said. “The relationship with the Obama administration had turned so sour, especially after the U.S. sanctioned Kim Jong Un personally. That really blew the relationship out of the water.”

Wit agreed that, while it got little attention at the time, the Obama administration had misread Kim when he succeeded his father in 2010, and had failed to pursue new nuclear talks before then that might have kept the North Koreans further away from achieving a nuclear-armed intercontinental ballistic missile that can reach the continental U.S., a breakthrough they are now on the brink of making. Obama’s approach, Wit said, now looks like a “big mistake.”

Given how close North Korea is to achieving that breakthrough, North Korea watchers are divided on how seriously to take the North Korean outreach at the start of the Trump administration and many worry that the Trump team, with a weakened Tillerson and depleted, demoralized diplomatic corps (there are no more than two current U.S. officials, Wit said, who have even met North Koreans), might not be able to undertake meaningful nuclear talks anyway.

But DiMaggio insisted in the interview that it was a genuine approach.

“Based on my conversations with them immediately after the inauguration, when I traveled to Pyongyang to meet them, they were very clear that this could be a new beginning,” she said. “They certainly didn’t have any illusions that things would be easy, but I think they were willing at least to consider the idea of talks with the United States without preconditions at that time.”

That same offer, she said, was made to the senior State Department envoy for North Korea, Joseph Yun, in meetings she brokered, and she believes it was still possible a few weeks ago, when she met a senior North Korean diplomat in Moscow. “She left the door open to talks with the United States,” DiMaggio said. “She had some thoughts on what would need to happen in order for that to take place, but it was a narrow opening, and I think that’s the way we should interpret it.”

Then again, the encounter in Moscow also underscored how close Pyongyang is to achieving the nuclear-power status it has long coveted: arming itself with a nuclear weapon that can directly target the United States. “They’re on their way to accomplishing that,” DiMaggio said. “So, the real question is, will they wait until after they’re able to declare that they’ve achieved that, or demonstrate it to a point where they feel satisfaction that they’ve reached a satisfactory outcome? And will they return to the table at that time?”

At least in part, the answer may depend on all those questions they’ve been peppering her with about Trump. Is he a reliable negotiator? A short-timer in office? A madman or just a guy who likes to play one on TV?

After 11 days in Asia, North Korea has come up at every one of Trump’s many stops, but those questions are no closer to being answered.