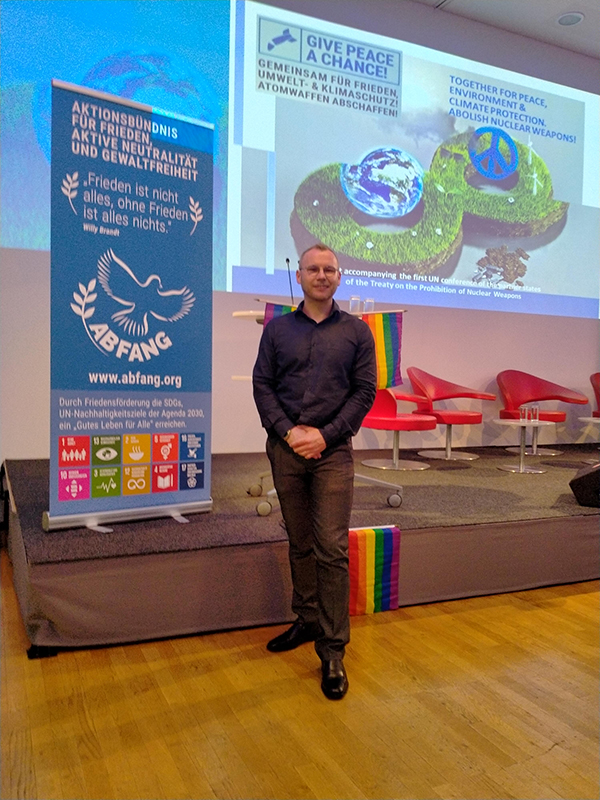 Event accompanying the first UN conference on partner states of the treaty on the Prohibition of Nuclear Weapons.

This event was a collaborative effort, and included contributions from the following organisations: 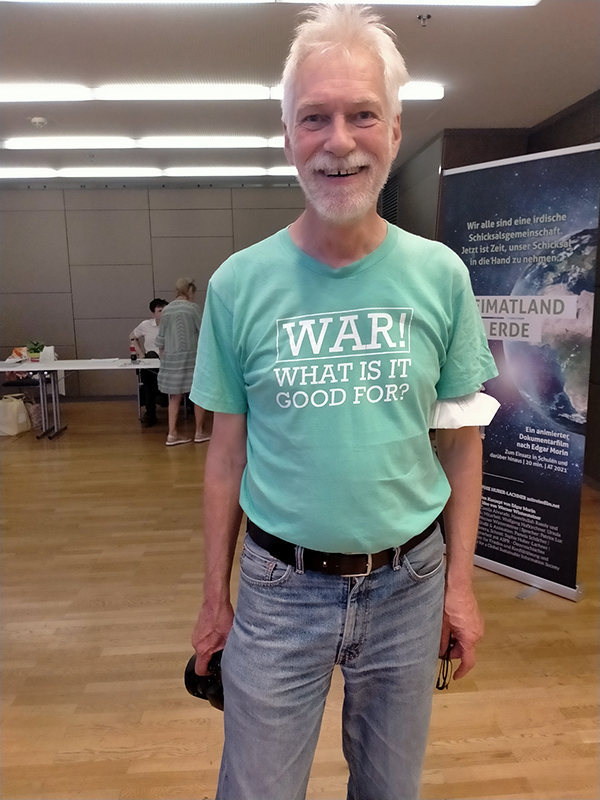 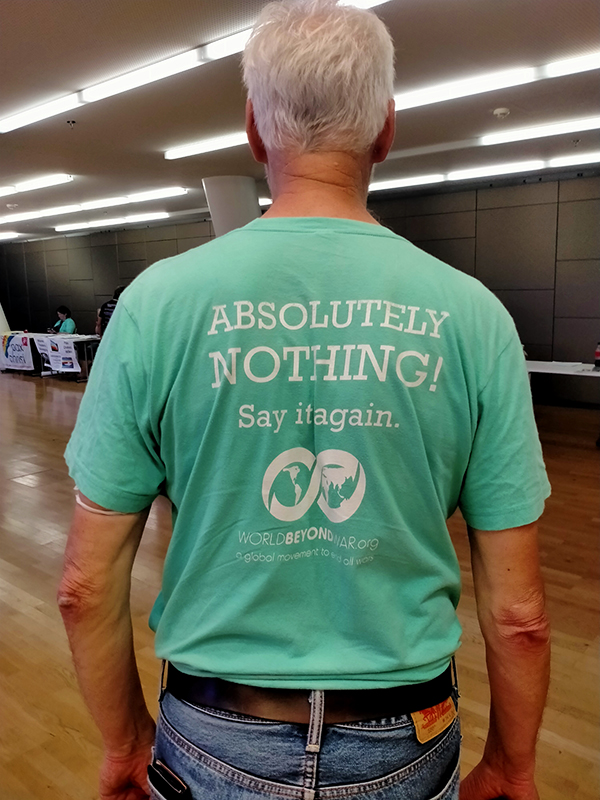 Phill participated in a panel discussion, that was streamed live and had simultaneous English-German translation. He started by introducing World BEYOND War and its work. In the process, he showed the organisational flyer, and a flyer entitled, ‘Nukes and War: Two Abolition Movements Stronger Together’. He then argued that there is no viable approach to sustainable peace and development without two things: war abolition and youth participation. In making the case for the importance of ending the institution of war, he gave a perspective on why war is development in reverse, before highlighting the mutually beneficial linkages between abolishing war and abolishing nuclear weapons. This provided the groundwork for a brief outline of some of the work WBW is doing to better engage youth, and all generations, in anti-war and pro-peace efforts.

The event included a range of other speakers, including:

Peacebuilding and Dialogue project. (Click here for a poster and more information)

Conceptually, the work aligns with WBW’s strategic goals of educating/engaging more people, more effectively, around anti-war and pro-peace efforts. Methodologically, the project is designed to bring young people together to develop and share knowledge and skills, and to engage in new dialogues for the purposes of strengthening capacities and cross-cultural understanding.

Youth from Austria, Bosnia and Hercegovina, Ethiopia, Ukraine, and Bolivia took part in this project.

Here is a brief summary of the work:

A note about the Peacebuilding and Dialogue project

This project was designed to bring young people together and equip them with conceptual and practical tools relevant to peacebuilding and dialogue.

The project started with young people completing surveys. This helped to better contextualise the following activities by giving young people an opportunity to share their ideas on what they think they need to learn to become better prepared to promote peace and dialogue.

This phase fed into the preparation of the workshops. 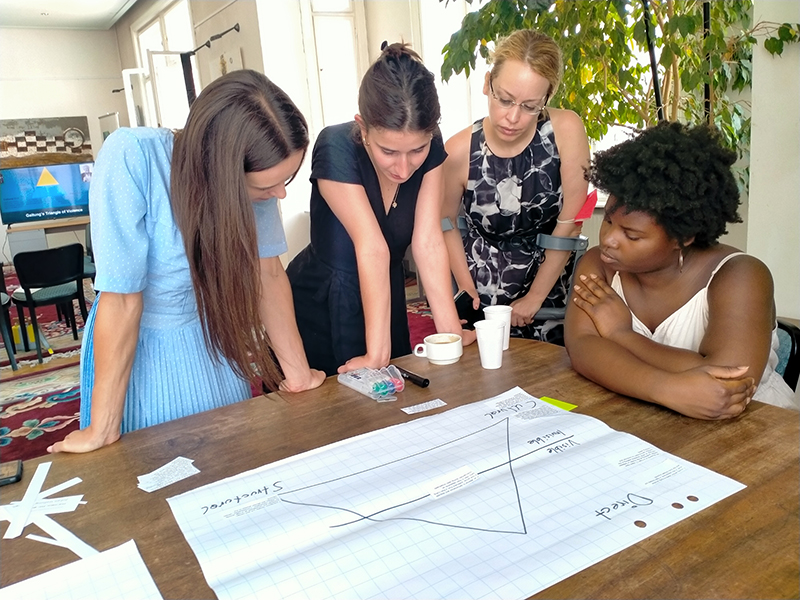 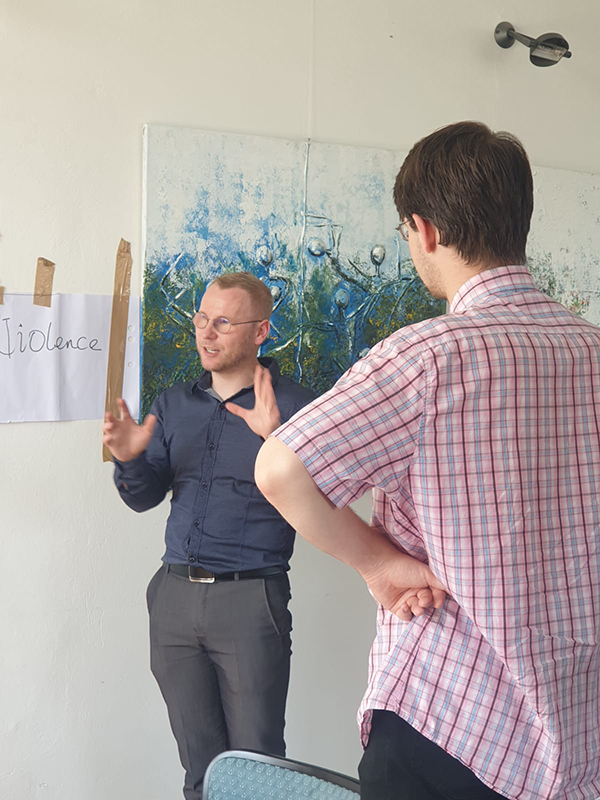 Taken together, the overall aim of the 2-day workshop was to provide young people with opportunities to develop knowledge and skills that are helpful to supporting their process of being and becoming peacebuilders, as well as their personal engagement with self and others.

Following the workshops, the project culminated with a third phase that included a virtual gathering. Held via zoom, the focus was on sharing the opportunities and challenges for promoting peace and dialogue processes in two different countries. The virtual gathering featured young people from the Austria team (made up of youth from Austria, Bosnia and Hercegovina, Ethiopia, and Ukraine) and another team from Bolivia.

Each team made a 10-15 presentation, followed by Q&A and a dialogue.

The Austrian Team covered a range of topics related to peace and security in their context, from the level of peacefulness in Austria (drawing on the Global Peace Index and the Positive Peace Index to a critique of peacebuilding efforts in the country, and from femicide to neutrality and its implications for Austria’s place in the international peacebuilding community. They stressed that while Austria has a high standard of living, there is still much that can be done to promote peace.

The Bolivian Team used Galtung’s theory of direct, structural, and cultural violence to give a perspective on gender violence and violence against (young) people and the planet. They used research-based evidence to support their claims. They highlighted a gap in Bolivia between rhetoric and reality; that is, a gap between what is said in policy, and what happens in practice. They finished by giving a perspective on what might be done to advance the prospects of a culture of peace in Bolivia, highlighting the important work of ‘Fundación Hagamos el Cambio’.

In summary, the virtual gathering provided an interactive platform to facilitate new knowledge-sharing opportunities and new dialogues among young people from different peace and conflict trajectories/social and political circumstances, across global North and South divides. 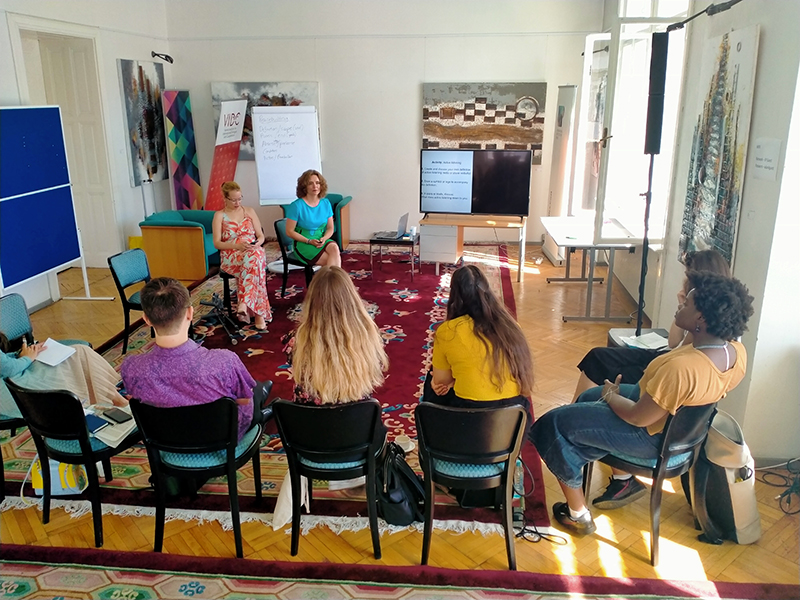 This project was made possible thanks to the support of many people and organisations. These include:

The project draws from and builds on previous work, including the following: