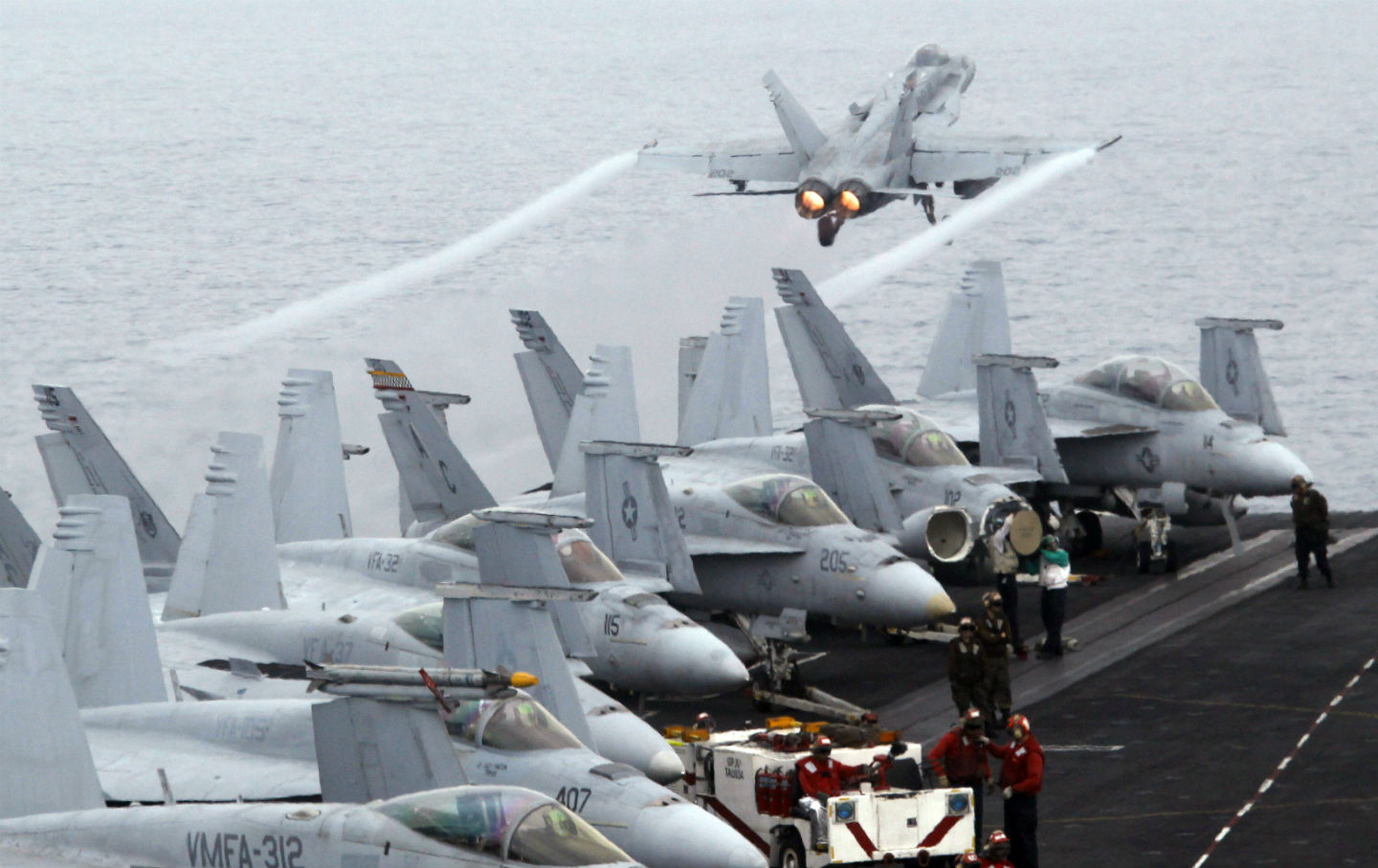 Since Donald Trump’s ascension to the presidency Washington has struggled to get a handle on his administration’s approach to matters of war and peace. In recent weeks, there has been intense focus on the perceived influence of top presidential aide Steve Bannon, who is seen as extremely hawkish on national security matters, especially when it comes to combating Islamic terrorism and confronting China’s rising influence. The prevailing wisdom seems to be that Bannon’s prominence within the administration – highlighted by his appointment to the National Security Council – portends a more bellicose turn in American national security policy.

And despite his purported skepticism of defense spending and aversion to spending cuts, Trump’s new budget bolsters spending for defense by $54 billion while cutting spending elsewhere.

There are undeniable reasons for concern – if not outright fear – about Bannon’s appointment, particularly coupled with soaring military investment. But these worries obscure more systematic – if also more subtle – reasons for the United States’ persistent aggressiveness on the world stage. (After all, American military interventionism long preceded the Trump Administration and continued during the presidency of Barack Obama). Our research suggests that a major, if under-appreciated, base of support for the frequent use of American military force abroad is the enthusiasm of wealthy persons – and especially large political donors.

On several key questions, wealthy people – and, in particular, “elite donors” (those who contribute $5,000 or more, or the top 1 percent of all donors) – are much more enthusiastic about the projection of American force than are American adults. The enthusiasm of the most wealthy and influential private actors in American politics provides a durable reservoir of support for the assertion of American power abroad. Given the profound, and likely growing, influence of political donors in American politics, our findings suggest that strong political supports for American foreign interventionism will remain long after Bannon, and Trump, have departed the executive branch.

These conclusions come from our ongoing research project on the preferences and contribution patterns of big donors. As part of this work, we investigated how preferences toward American military spending and the use of force compared between elite donors, wealthy individuals (those with family incomes of more than $150,000), all donors, and all American adults.

Our analysis drew on a cumulative data file from the 2008, 2010, 2012, and 2014 Cooperative Congressional Election Studies surveys. By pooling together multiple surveys, we were able to obtain an unusually large sample of these elite donors, as well as extremely large samples of several other groups: all political donors, individuals with family incomes over $150,000, and all American adults. (Across all surveys, there were 196,000 respondents.) To make the elite donor sample nationally representative, we re-weighted the sample using information from Catalist, a political data firm with information on more than 260 million adults, and the Federal Election Commission.

We also made efforts to ensure that we correctly identified large donors. While it’s unlikely that many people lie about contributing large amounts of money to campaigns — being an elite donor is not exactly a status that most people aspire to — we tried to account for this possibility by dropping from our analysis any self-identified elite donors who were not also validated registered voters. On the whole, our approach allowed us to examine the preferences of elite donors, and other groups, with a great deal of precision. 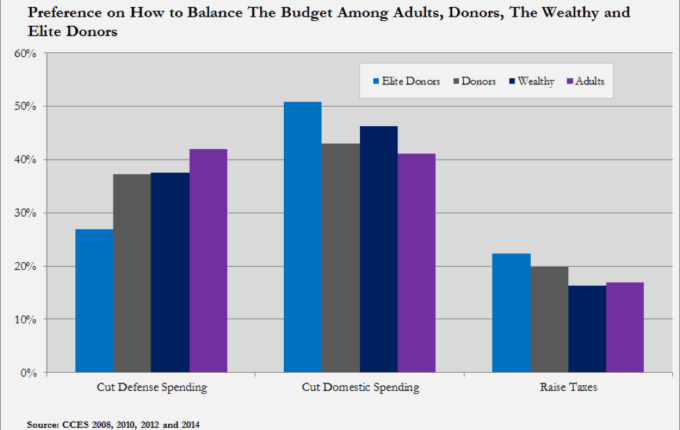 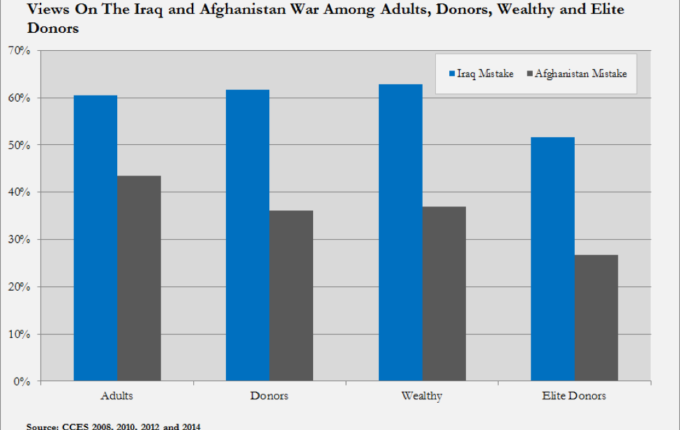 “Elite donors” and the wealthy are noticeably more likely to support a military intervention to prevent genocide (50 percent and 51 percent, respectively) compared to the general public (40 percent). And elite donors and wealthy Americans are also much more likely to express support for military interventions to destroy terrorist training camps. Sixty-four percent of American adults supported this hypothetical; but 80 percent of “elite donors” and 76 percent of wealthy Americans did. 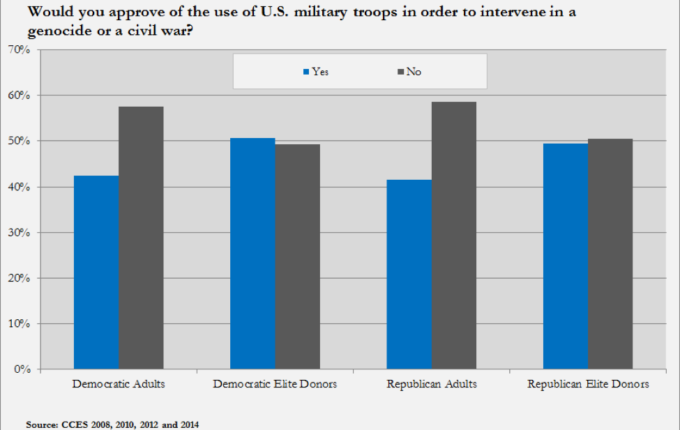 These attitudinal differences matter. Recent scholarship on representation in politics strongly suggests that large donors and wealthy Americans exercise disproportionate influence on politicians, and that this bias is most notable on matters of national security and foreign policy. One reason that this might occur is that Americans feel less confident in judging debates over foreign interventions and often defer to elites on such matters, especially during conflicts.

Benjamin Page and Jason Barabas compared the foreign policy preferences of foreign policy elites using the Chicago Council on Foreign Relations surveys and found “many differences of 30, 40, and even 50 percentage points compared with the general public.”  Benjamin Page and Marshall Bouton find, in their book The Foreign Policy Disconnect, that “contrary to the assertions of many scholars, pundits and political elites,” “collective public opinion about foreign policy is not inconsistent, capricious, fluctuating or unreasonable.”

Rather, they argue, the general public “generally prefers to use cooperative and multilateral means to pursue foreign policy aims.” Kull and Destler also find that elites tend to misread public opinion, and that Americans aren’t isolationist, but rather favor multilateral intervention.

This applies not only to a more aggressive use of force internationally, but trade policy as well, as donors are more likely to support free trade agreements. In the 2014 CCES, 68 percent of donors contributing $1,000 or more support a US-Korea free trade agreement, compared to 57 percent of the full sample.

Most of the debates about money in politics center around domestic policy: Bernie Sanders’s campaign centered around the way that millionaires and billionaires blocked the progressive agenda. However, our research suggests that elite donors have different views about the global economy and use of force overseas than the general public. Donors often give money to enact that vision, such as the millions Sheldon Adelson and Haim Saban have given to shape policy on Israel. Politicians who buck the establishment on trade and military force overseas often find themselves quickly on the defensive. Donors are likely to oppose any attempt by Trump to cloister America from the international community, but they also are unlikely to tap the brakes if he moves the country towards war.