When the corporate media push for war, one of their main weapons is propaganda by omission.

In the case of the recent crisis in Ukraine, Western journalists have omitted key context about the expansion of NATO since the end of the Cold War, as well as US support for the Maidan coup in 2014 (FAIR.org, 1/28/22).

A third and crucial case of propaganda by omission relates to the integration of neo-Nazis into the Ukrainian armed forces (FAIR.org, 3/7/14, 1/28/22). If the corporate media reported more critically about Western support for the neo-Nazi-infested Ukrainian security services, and how these forces function as a front-line proxy of US foreign policy, public support for war might be reduced and military budgets called into greater question.

As recent coverage demonstrates, one way of resolving this issue is by not mentioning the inconvenient matter of Ukrainian neo-Nazis altogether. 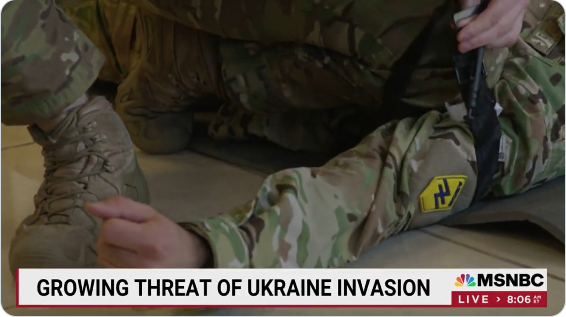 The Azov Battalion’s Nazi-inspired logo can be seen in an MSNBC segment (2/14/22).

In 2014, the Azov Battalion was incorporated into the National Guard of Ukraine (NGU) to assist with fighting against pro-Russian separatists in eastern Ukraine.

At the time, the militia’s association with neo-Nazism was well documented: The unit used the Nazi-inspired Wolfsangel symbol as its logo, while its soldiers sported Nazi insignia on their combat helmets. In 2010, the Azov Battalion’s founder declared that Ukraine should “lead the white races of the world in a final crusade…against Semite-led Untermenschen.”

The Azov Battalion is now an official regiment of the NGU, and operates under the authority of the Ukrainian Ministry of Internal Affairs.

‘A granny with a gun’ 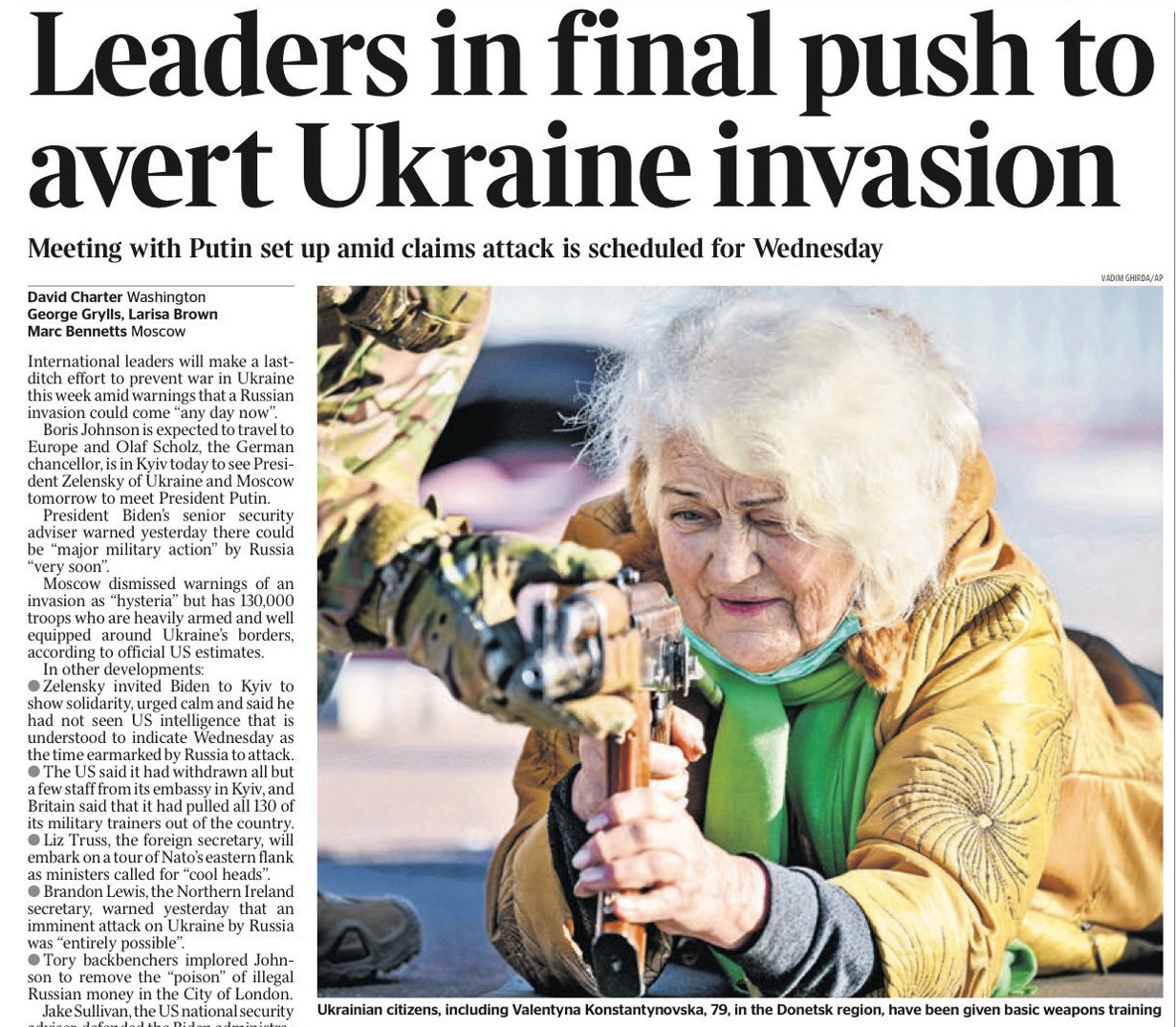 Pointing out that people training the 79-year-old woman to use an assault weapon (London Times,  2/13/22) were members of a fascist force would have spoiled the heart-warming aspect of the image.

In mid-February 2022, as tensions mounted between the US and Russia over Ukraine, the Azov Battalion organized a military training course for Ukrainian civilians in the port city of Mariupol.

Images of Valentyna Konstantynovska, a 79-year-old Ukrainian learning to handle an AK-47, soon featured across the Western broadcast and print media.

The figure of a pensioner lining up to protect her homeland made for an emotive image, collapsing the conflict into a simple good versus evil binary, while adding weight to US and British intelligence assessments forecasting an immediate full-scale Russian invasion.

Such a narrative was not to be ruined by reference to the neo-Nazi group training her. Indeed, mention of the Azov Battalion was largely erased from mainstream coverage of the event.

The BBC (2/13/22), for instance, showed a clip of “civilians lining up for a few hours’ military training with the National Guard,” with International Correspondent Orla Guerin describing Konstantynovska endearingly as “a granny with a gun.” Though Azov Battalion insignia was visible in the report, Guerin made no reference to it, and the report ends perversely with an NGU combatant helping a child to load an ammunition magazine. 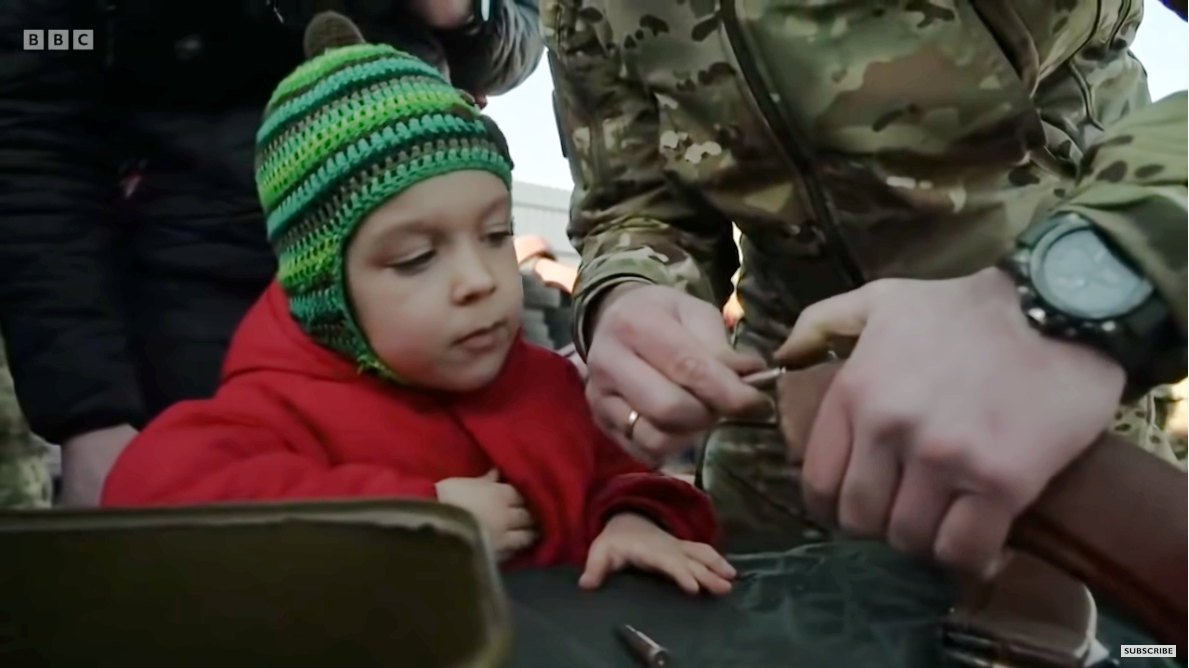 The BBC (2/13/22) depicts a young boy getting a lesson on how to load ammo—without mentioning that the training was sponsored by a far-right paramilitary.

The BBC (12/13/14) has not always been so reluctant to discuss the Azov Battalion’s neo-Nazism. In 2014, the broadcaster noted that its leader “considers Jews and other minorities ‘sub-human’ and calls for a white, Christian crusade against them,” while it “sports three Nazi symbols on its insignia.”

Both MSNBC (2/14/22) and ABC News (2/13/22) also reported from Mariupol, showing similar video footage of an Azov Battalion member teaching Konstantynovska to use a rifle. As with the BBC, no mention was made of the regiment’s far right association. 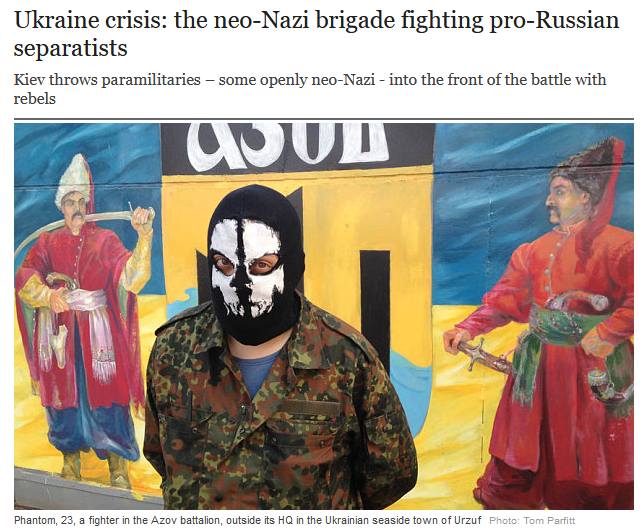 There was a time when Western news outlets (Daily Telegraph, 8/11/14) recognized the Azov Battalion as a neo-Nazi force rather than a source of photo ops.

The printed press fared little better. On February 13, UK newspapers the London Times and the Daily Telegraph ran front-page spreads showing Konstantynovska preparing her weapon, without any reference to the Azov Battalion running the training course.

Worse still, both the Times and the Daily Telegraph had already reported on the militia’s neo-Nazi associations. In September 2014, the Times described the Azov Battalion as “a group of heavily armed men” with “at least one sporting a Nazi logo…preparing for the defense of Mariupol,” adding that the group had been “formed by a white supremacist.” For its part, the Daily Telegraph described the battalion in 2014 as “the neo-Nazi brigade fighting pro-Russian separatists.”

In light of NATO’s recent posturing in defense of Ukraine, the fact of the Azov Battalion’s neo-Nazism seems to have become an inconvenience.

On December 16, 2021, only the US and Ukraine voted against a United Nations resolution condemning the “glorification of Nazism,” while the United Kingdom and Canada abstained. There can be little doubt that this decision was made with the conflict in Ukraine in mind.

In the doctrine of Western militarism, the enemy of my enemy is my friend. And if that friend happens to enlist neo-Nazis, Western corporate media can be relied on to look the other way.