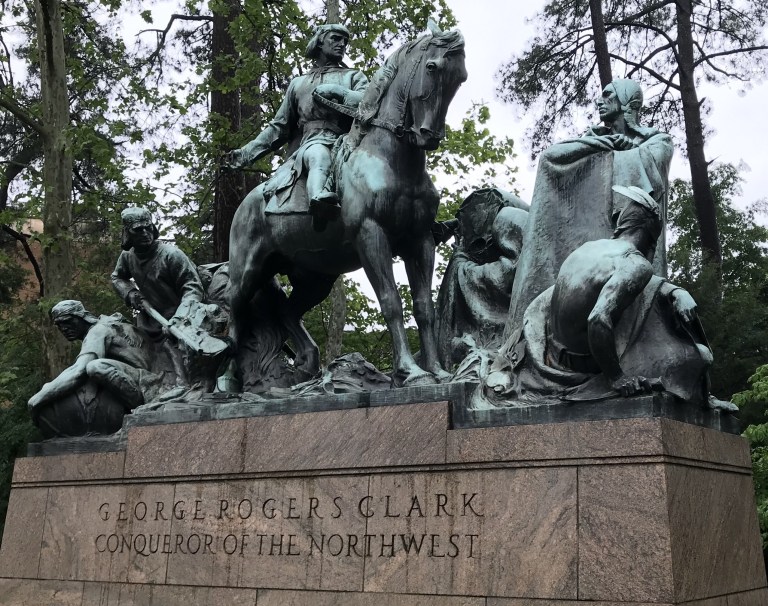 Jeffrey Ostler’s Surviving Genocide: Native Nations and the United States from the American Revolution to Bleeding Kansas, tells a complex, honest, and nuanced story of what overall and in many particular parts fits the UN definition of and the popular conception of genocide. So, of course, it is primarily a story of not surviving genocide, though I guess that would have been too much of a “Dog Bites Man” headline for any publisher.

But parts of the story are of surviving. Some of the surviving is temporary. People slowed and mitigated the catastrophe. There are lessons there for all of humanity as it proceeds to destroy its own climate. There are lessons in particular for Palestinians and others facing similar assaults today. And some of the surviving has lasted until the present. Reduced in numbers, many nations have survived.

In fact, through the process of driving the native nations west and assaulting them, there was a lot more survival going on than was generally acknowledged. In Ostler’s account, the U.S. government had a clear policy from the start, not just in 1830, of moving Native Americans west of the Mississippi, and enacted that policy. Yet, between the 1780s and 1830, the population of Native Americans east of the Mississippi increased. The formalized and accelerated policy of removal put in place in 1830 was driven by greed for land and racist hatred, not by any humanitarian impulse to help native peoples survive by moving them to better locations where they wouldn’t supposedly face inevitable demise. They would have survived better if left alone, rather than being forced on difficult journeys into already occupied lands and lands without the means to sustain them.

Greed for land really seems to have been the dominant motivation. Smaller groups of Native Americans in the East not occupying highly desirable territory were allowed to remain, and in some cases have remained to this day. Others that put up too great a fight were allowed to remain for a time. Others that adopted European ways of agriculture and all the trappings of what was called “civilization” (including slavery) were allowed to remain until their land became too desirable. The supposed failure of native nations to become “civilized” seems to have no more basis in reality as a motivation for expelling them than does their supposed dying out. Neither does the supposed need to make peace among them. Nations fought each other as they were driven into each other’s territory by the U.S. settler colonists.

The United States did sometimes make peace between warring nations, but only when it served some purpose, such as facilitating the displacement of more people into their land. The work of empire was not the work of brute force alone. Much “diplomacy” was needed. Treaties had to be secretly made with minority groups within native nations. Treaties had to be secretly worded to mean the opposite of what it appeared. Leaders had to be bribed or coaxed into meeting, and then captured or killed. Carrots and sticks had to be applied until people “voluntarily” chose to abandon their homes. Propaganda had to be developed to whitewash atrocities. The imperial wars now named for Native Americans and fought with weapons named for Native Americans are part of an imperial history that began before 1776. The U.S. government has been announcing that Iran attacked a ship, or the equivalent, for a very long time.

When I read in Surviving Genocide that the primary tool the federal government deployed to make the Creeks so miserable that they would move west was the state of Alabama, that seems sensible to me. I think of the state of Alabama as highly skilled at making people miserable. But, of course, it could have developed those skills as it used them against the Creeks, and anyone made miserable by Alabama since may be the beneficiaries of that history.

There was plenty of brute force. Ostler shows that U.S. officials developed the policy that “wars of extermination” were “not only necessary, but ethical and legal.” Causes of decline among Native peoples included direct killing, other traumatizing violence prominently including rape, the burning of towns and crops, forcible deportation, and the intentional and non-intentional spreading of diseases and of alcoholism to weakened populations. Ostler writes that the most recent scholarship finds the devastation caused by European diseases resulted less from Native Americans’ lack of immunity, and more from the weakness and starvation created by the violent destruction of their homes.

The American War for Independence (for one elite from another at the expense of native and enslaved people) involved more destructive assaults on Native Americans than had the preceding wars in which George Washington had acquired the name Town Destroyer. The outcome of the war was even worse news.

Assaults on native peoples would come from the U.S. government, state governments, and ordinary people. Settlers would push the conflicts forward, and in settled parts of the East where Native Americans remained, individuals would steal their land, kill, and harass them. There were groups like the Quakers who dealt much less cruelly with indigenous people. There were ebbs and flows, and every nation has a different story. But fundamentally, the United States intended to get rid of Native Americans and got rid of many of them and took most of the land they lived on.

Of course, something that survives genocide is the knowledge of it, the facts that allow accurate and appropriate memory and sincere efforts to do better in the present.

I’ve been inspired to create a petition to the President of the University of Virginia James Ryan called “Remove Monument to Genocide that Welcomes People to UVA.”

Remove the statue of George Rogers Clark engaged in genocide to a museum where it can be presented as a shameful memory.

Why is this important?

“George Rogers Clark, Conqueror of the Northwest” is a massive sculpture that was put up in the 1920s, just like the Charlottesville statues of Lee and Jackson (and the one of Meriwether Lewis and William Clark). It was paid for by the same racist gazillionaire who paid for the statues of Lee and Jackson (and the one of Lewis and Clark). It involved the same level of democratic decision making by the people of Charlottesville, namely none. It, too, depicts a white man on a horse, dressed for war. It, too, might remain a war monument, and therefore protected by state law, completely independent of whether we should decide we dislike it. However, Clark’s wars are not in the list of wars that the state of Virginia says must have their monuments protected. Often wars on Native Americans are not counted as real wars, and that may have a benefit here. UVA, it seems, has the power to remove this monstrosity and just hasn’t done it.

There are differences from the statues of Lee and Jackson. In this case, Clark has a couple of other men with guns behind him, and he’s reaching back for a gun. There are three Native Americans in front of him. The UVA student newspaper celebrated the statue when it was first created as “explaining the futility of resistance.” The base of the sculpture calls Clark the “Conqueror of the Northwest.” The Northwest means the general area of today’s Illinois. Conquering means basically genocide. One of the three Native Americans appears to be carrying an infant.

I don’t want to diminish the horror tied to the monuments to the Civil War or the War on Vietnam or World War I or any of Charlottesville’s and UVA’s monumental paeans to mass murder, but only this particular artistic perversion openly depicts deadly violence against civilians with unalloyed pride and sadism. Robert E. Lee could be riding in a parade for all anyone can tell from his monument. Not Clark. He is depicted engaged in what he explicitly advocated for and acted upon: the indiscriminate murder of Native Americans in pursuit of their elimination.

George Rogers Clark himself said that he would have liked to “see the whole race of Indians extirpated” and that he would “never spare Man woman or child of them on whom he could lay his hands.” Clark wrote a statement to the various Indian nations in which he threatened “Your Women & Children given to the Dogs to eat.” While some might object even to a less graphic monument to this murderer, one in which he stood or rode alone, Charlottesville doesn’t have one of those. It has a monument to genocide, shamelessly depicting genocide.

Charlottesville/UVA also has monuments to Thomas Jefferson, who, as Governor of Virginia, sent Clark west to attack Native Americans, writing that the goal “should be their extermination, or their removal beyond the lakes or Illinois river.” Clark killed the captured and destroyed the crops of those he was sent by Jefferson to exterminate or remove. Clark later unsuccessfully proposed further military expeditions to Virginia Governor Benjamin Harrison in order to demonstrate “that we are always able to crush them at pleasure.”

Clark was considered a hero because his beliefs and actions were widely accepted or supported. His bit part was played in a broad and long-lasting genocidal assault on the native peoples of this continent. Every assertion about and quote of Clark above is documented in a new book from Yale University Press called “Surviving Genocide” by Jeffrey Ostler. Ostler shows that U.S. officials developed the policy that “wars of extermination” were “not only necessary, but ethical and legal.” Causes of decline among Native peoples included direct killing, other traumatizing violence prominently including rape, the burning of towns and crops, forcible deportation, and the intentional and non-intentional spreading of diseases and of alcoholism to weakened populations. Ostler writes that the most recent scholarship finds the devastation caused by European diseases resulted less from Native Americans’ lack of immunity, and more from the weakness and starvation created by the violent destruction of their homes.

In George Rogers Clark’s day, John Heckewelder (a missionary and author of books on the customs of Native Americans) noted that frontiersmen had adopted “the doctrine . . . that the Indians were the Canaanites, who by God’s commandment were to be destroyed.” In our day, we make Clark’s monument central to our public life in Charlottesville, where it greets those arriving from downtown to the campus of the University of Virginia.