When Will It End? US Government Again Uses Militarized Response to Stand of Native Americans to Injustice

Its like we are back to the 1800s when the U.S. Army rampaged against Native American tribes across the American West.  The militarized police and the use of the National Guard this week in responding to the Standing Rock Sioux native American challenge in North Dakota to big oil and their dangerous pipelines reminds one of Custer’s Last Stand against Sitting Bull.

In fact, the portrait of Sitting Bull is on one of the most popular t-shirts available to supporters of the Water Protectors, as those are known who protest yet one more oil pipeline that crosses sensitive watershed areas and major rivers of the United States. 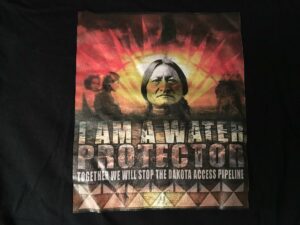 Four days last week, I joined hundreds of Native Americans and social justice campaigners from around the United States and around the world, in challenging the Dakota Access Pipe Line (DAPL), the 1,172 mile, $3.7 billion dollar scar across the face of North Dakota, South Dakota, Iowa and Illinois. Last week, I photographed the area along Highway 6 south of Bismarck where the Energy Transfer Partnership contractors were busy digging the trench for the “Black Snake” as the pipeline is called. 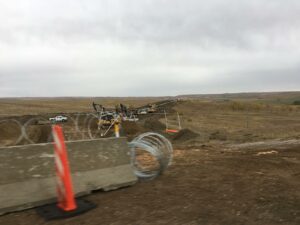 I also counted 24 police cars returning to Bismarck at shift change around 3pm, a huge number of state law enforcement personnel and vehicles dedicated to protection of corporate business, instead of the rights of citizens.

Huge machines were chewing up the earth near water sources for all of North Dakota. The pipeline was rerouted from near Bismarck so if the pipeline breaks it would not endanger the water supply of the capital city of the state. However they relocated where it will cross the Missouri River and will jeopardize the water supply of the Native Americans and all Americans living in southern North Dakota and downstream of the Missouri River!

On Thursday, the digging took a more confrontation turn. The huge digging equipment  arrived to cut across State Highway 1806 at a spot where water protectors had set up a front line camp several months ago, a one mile north of the main encampment of over 1,000 people.  As the equipment arrived, the water protectors blocked the highway. 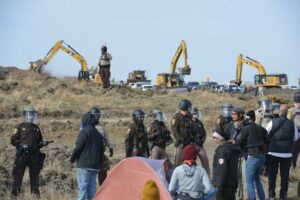 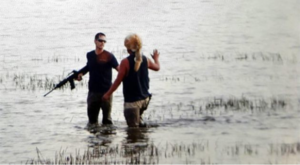 On Friday more than 100 local and state police and North Dakota National Guard arrested over 140 people who blocked the highway attempting to stop the destruction of the land. Police in riot gear with automatic rifles lined up across a highway, with multiple MRAPs (mine-resistant ambush protected military vehicles),

an LRAD sound cannon that can immobilize persons nearby, Humvees driven by National Guardsmen, an armored police truck and a bulldozer. 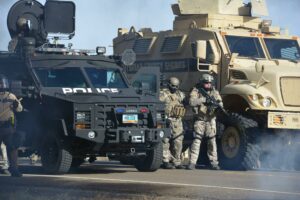 Police used mace, pepper spray, tear gas and flash-bang grenades and bean bag rounds against Native Americans who lined up on the highway. 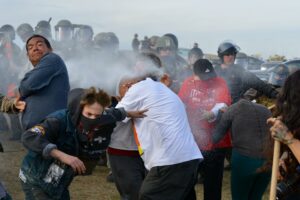 Police reportedly shot rubber bullets at their horses and wounded one rider and his horse. 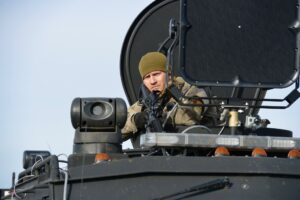 As this police mayhem was unfolding, a small herd of buffalo stampeded across a nearby field, a strong symbolic signal to the water protectors who erupted in cheers and shouts, leaving law enforcement officials wondering what was happening.

The legality of the use by the State of North Dakota of its National Guard for the protests has been questioned strongly.  National Guardsmen have been operating checkpoints to control entrance into the area and later were reportedly used to go house to house to talk to citizens about the protests—clearly law enforcement functions, not responsibilities of a military organization.

Supporters of the water protectors come from all over the United States.  One grandmother arrived with cooking equipment and food, purchased with her social security check.  Her granddaughter who helps her keep track of her finances, called her and said, “Granny, you have only $9 left in your bank account.”  She responded, “Yes, and I going to use it today to buy more food to cook for these good people who are trying to save our water and our culture.”