World Peace Through Law: Replacing War With the Global Rule of Law 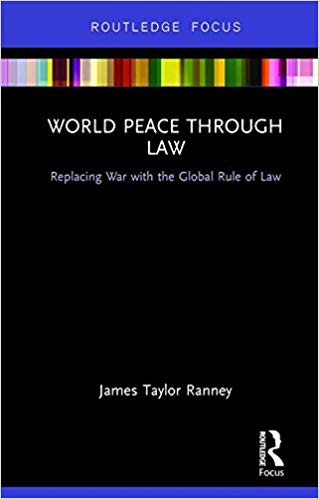 This article is a synopsis of James Ranney’s new book, World Peace Through Law. Purchase the book here1

We must end war. Whether we realize it or not, how to avoid a nuclear war is the most important issue facing humanity. As H.G. Wells put it: “If we don’t end war, war will end us.” Or, as President John F. Kennedy said: “Mankind must put an end to war before war puts an end to mankind.”

We seem not to have thought through the implications of the above statements. For if the above proposition is true, it follows that we need to develop alternatives to war. And therein lies the simple crux of our proposal: global alternative dispute resolution mechanisms—a four-stage comprehensive system of compulsory negotiation, mediation, arbitration, and adjudication.

History of the idea. This is not a new idea, nor is it a radical idea. Its origins go back to (1) the famous British legal philosopher Jeremy Bentham, who in his 1789 Plan for an Universal and Perpetual Peace, proposed “a Common Court of Judicature for the decision of differences between the several nations.” Other prominent proponents include: (2) President Theodore Roosevelt, who in his long-neglected 1910 Nobel Peace Prize acceptance speech proposed international arbitration, a world court, and “some kind of international police power” to enforce the decrees of the court; (3) President William Howard Taft, who espoused an “arbitral court” and an international police force to compel resort to arbitration and adjudication; and (4) President Dwight David Eisenhower, who urged creation of an “International Court of Justice” with compulsory jurisdiction and some kind of “international police power universally recognized and strong enough to earn universal respect.” Finally, in this regard, under the Eisenhower and Kennedy administrations, a “Joint Statement of Agreed Principles for Disarmament Negotiations” was negotiated over several months by U.S. representative John J. McCloy and Soviet representative Valerian Zorin. This McCloy-Zorin Agreement, passed by the UN General Assembly on December 20, 1961 but not ultimately adopted, contemplated establishment of “reliable procedures for the peaceful settlement of disputes” and an international police force that would have had a monopoly of all internationally-usable military force.

World Peace Through Law (WPTL) summarized. The basic concept, which is less drastic than the McCloy-Zorin Agreement, has three parts: 1) abolition of nuclear weapons (with concomitant reductions in conventional forces); 2) global dispute resolution mechanisms; and 3) various enforcement mechanisms, ranging from the force of world public opinion to an international peace force.

Conclusion. WPTL is a thoroughly middle-of-the-road proposal that is neither “too little” (our current strategy of “collective insecurity”) nor “too much” (world government or world federalism or pacifism). It is a concept that has been strangely neglected for the past fifty years5 which deserves re-consideration by government officials, academia, and the general public.