Yemen Is Starving: Vigil and Fast at the United Nations

Yemen Is Starving: Peace activists, protesting the mounting humanitarian crisis in Yemen, to begin week-long fast and vigil at the UN.

New York, NY — On April 10, 2017, approximately 20 peace activists will begin a week long vigil and fast in front of the United Nations. They are calling for peace and justice in Yemen, and standing in solidarity with its civilian population. They will also be demanding an end to U.S. complicity in a war that is taking a devastating toll on the Yemeni people.

Ravaged by war, blockaded by sea, and regularly targeted with Saudi and U.S. airstrikes, Yemen is now on the brink of total famine.

Yemen is currently being ravaged by a brutal conflict, with injustices and atrocities on all sides. More than 10,000 people have been killed, including 1,564 children, and millions have been displaced from their homes. UNICEF estimates that more than 460,000 children in Yemen face severe malnutrition, while 3.3 million children and pregnant or lactating women suffer acute malnutrition. The U.S. backed Saudi-led coalition is also enforcing a sea blockade on rebel-held areas. Yemen imports 90% of its food; because of the blockade, food and fuel prices are rising and scarcity is at crisis levels. While Yemeni children are starving, US weapons makers, including General Dynamics, Raytheon, and Lockheed Martin, are profiting from weapon sales to Saudi Arabia.

At this critical juncture, all member states of the UN must urge an end to the blockade and airstrikes, a silencing of all guns, and a negotiated settlement to the war in Yemen.

With their fast and peaceful protest, the activists will urge a radical departure from U.S. policies exacerbating the deadly tragedy facing Yemeni civilians.

Participants note their responsibility to ensure that the U.S.:
1.    Stops all drone attacks and military “special operations” within Yemen
2.    Ends all U.S. weapon sales and military aid to Saudi Arabia
3.    Provides compensation to those who suffered losses caused by U.S. attacks.

The activists will gather each day from 10:00 a.m. – 2:00 p.m. at the United Nations Isaiah Wall, on First Avenue between 42nd and 43rd Streets. They will be joined by activists and supporters from around the U.S. who will share their protest and peaceful witness to the tragedy currently befalling the people of Yemen. 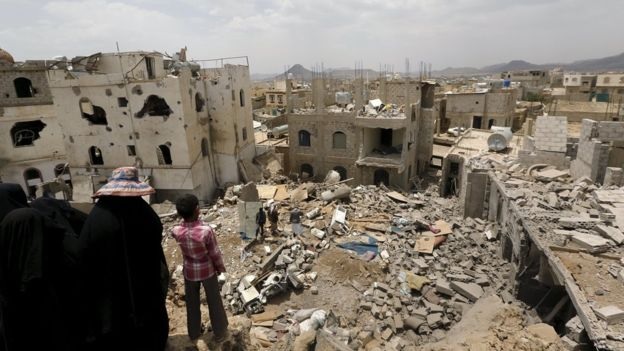